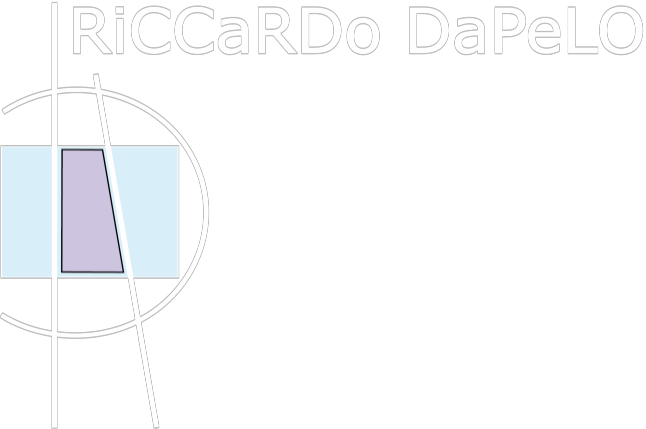 Genoa, 1962.
After completing high school he began studies in philosophy (never officially ended, but still obstinately in progress) and graduated in piano and composition at the Conservatory of his city. Later he attended the Giacomo Manzoni courses of Composition at the Fiesole School of Music and Electronic Music (Alvise Vidolin) at the Venice Conservatory, graduating with honors.
Since 1992 he decided to devote himself entirely to composition, acoustics and electronics. Performed in Italy and abroad (Germany, Holland, Greece, France, Sweden, Spain, Portugal, Switzerland, Cuba, Brazil, Argentina, United States), wins in '94 the first prize at the international competition "Brandenburgische Sommerkonzerte" of Berlin, and is a finalist in the international competitions "Porrino" of Cagliari (1994), "L. Russolo "in Varese (1995, 1996) and Bourges (1996). In the meantime, from 1992 to 1994 he works as a Midi programmer for Edirol (ROLAND Italy). In 1993 he founded with F. Vernizzi and R.Massetti the ArteSuono Studio, specialized in digital recording, editing and mastering of classical music, active until 1999. After that experience he still does editing and mastering works for different labels.
Since 1995 he began collaborating with InfomusLab_Casa Paganini (University of Genoa) in research and artistic experimentation. From 1999 to 2006 he worked with the sculptor Pinuccio Sciola in international projects of interactive art installations, in various exhibits (Turin, Frankfurt, The Habana, Hannover Expo 2000).
In 1998 he founded, with composers Andrea Nicoli and Riccardo Vaglini, ArsPublica editions, with which by then publishes his works.
In 2015 he founded ALA (www.alarkestra.com), a mixed group of improvisation and voice and electronic performance.

He has made numerous sound installations (mobile or stationary), art installations and perfomances for theatrical spaces, museums and exhibition:

In 2010, for the twentieth anniversary of the death of Giorgio Caproni, he creates for the Province of Genoa a long-term sound installation in the elevator of Castelletto (Genoa, July-December 2010) and the same year is staging "Il conte di Kevenhüller "a work of electronic music theater on the poet's texts (Casa Paganini, Genoa, December 2010)

He is interested in interaction between instruments and live electronic, processing of the human voice and the poetic word (with particular attention to the works of Giorgio Caproni and Edoardo Sanguineti), seeking technologies and forms of inte(g)ra(c)tion of different media (music, sound design, sound art, installations, dance, video art, theatre). In 2001 began a series of works that contain digital sets and digitally synthesized images. Lately his interests are turning also  to the improvisational practices and has begun a series of studies (Adaptive Studies) on adaptive artwork, through the interaction between musician and computer.
He published several papers (and also holds seminars) on synthesis and analysis of the human voice, on musical development of artificial emotions, on spatialization, on application of new technologies to artistic creation, on philosophy of art, on time in music.
He has recorded several works on CD (SAM records, Rivo Alto, Tau Kay, Ars Publica) and his compositions are published by Ars Publica.
Winner of Italian chair competitions in Harmony and Composition, has taught at the Conservatories of La Spezia, Sassari, Cagliari, Genoa, attending lectures in Electronic Music courses. From 2013 he teaches Composition and Music and Technology at Piacenza Conservatory.
He has been vice president of AIMI (Italian Association of Computer Music) and representative AIMI at G.A.T.M. (Analysis and Music Theory group).